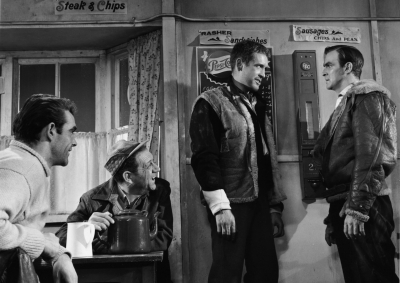 Produced by the Rank Organization, Hell Drivers was a turning point for director Cy Endfield. Endfield (and Joseph Losey) regular Stanley Baker plays an ex-convict who takes a job as a truck driver at a gravel haulage company, but quickly grows outraged by the dangerous conditions and corruption he encounters. Filmed with brutal realism, Hell Drivers combines suspense with social analysis, and features a strong supporting cast.

Impulse, which Cy Endfield directed (as Charles de Lautour) and co-wrote (as Jonathan Roche), throws its American protagonist into two foreign worlds: the provincial village where he lives with his English wife, and the London underworld to which he is lured by a femme fatale. A low-budget B production, Impulse succeeds in fusing classic noir themes with an outsider’s view of British society that Endfield credited to his still “alienated eye.”