Heaven Can Wait and Design for Living 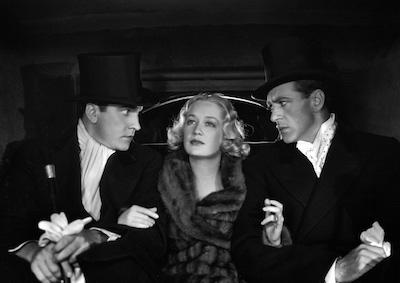 After his death, wealthy playboy and philanderer Henry (Don Ameche) descends to hell for his just deserts. However, his “Excellency” the devil has doubts about the sinner’s qualifications and asks him to relate the story of his life, including his 25-year marriage to Martha (Gene Tierney). Lubitsch lovingly visualizes the first 40 years of the 20th century, toning down Technicolor’s garish hues to exude elegance and a bit of nostalgia. Henry may consider himself a cad, but for Lubitsch he is a flawed but loving husband who retains audience sympathy even when he is being slightly bad. Lubitsch could identify. Martha’s nouveaux riches parents who made their money in the meat-packing business (played by Charles Coburn and Marjorie Main) are as uncouth as “the Oyster King” from 20-plus years earlier, their house in Kansas City a monument to bad taste.

American playwright Tom (Fredric March) and painter George (Gary Cooper) meet free spirit Gilda (Miriam Hopkins) on a train trip through Europe and fall in love. Since Gilda can’t decide whom she loves more, she suggests a ménage à trios sans sex, for the sake of art, but hormones keep interfering. Screenwriter Ben Hecht boasted that only a single line of dialogue from Noel Coward’s play remained in Lubitsch’s film, and in fact almost the first half of the film involves the backstory, before the play begins. Also missing is the keyhole perspective on Alfred and Lynn Lunt who had starred in the stage play with Coward, all three purportedly being gay. But this pre-Code comedy does display premarital sex, cohabitation and adultery with customary Lubitsch touches, and knowing viewers will even get the hints of homosexuality that marked Coward’s take on the story. Lubitsch as always remained the sexual libertarian.