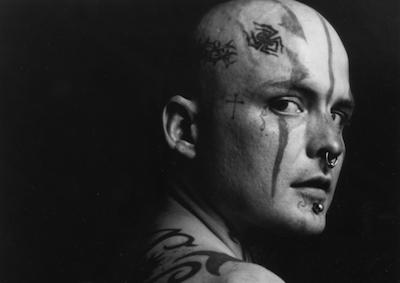 Hallelujah! Ron They: A Story of Deliverance (1997)
Directed by Catherine Gund

Filmmaker Catherine Gund’s intimate portrait of performance artist Ron Athey charts his early career from redefining “go-go dancing” at the legendary Club Fuck! in Los Angeles to an international tour featuring his first major ensemble pieces, Martyrs and Saints, Four Scenes in a Harsh Life and Deliverance. Raised to be a Pentecostal minister, Athey channelled his messianic calling into a ritual artistic practice that mobilizes religious iconography, sadomasochism and extreme piercing into a means of transcendence. Athey and his deeply personal work have drawn a family of like-minded performers around him. The bond of trust these outsiders share as they explore and blur the boundaries of desire, sexuality and trauma, emerges as one of the film’s central subjects and an enduring testament to the power of Athey’s life and art.

This quarter we launch a new season of Legacy Project screenings programmed by special guest curators who will select works from the Legacy collection that have had a significant influence and impact on their lives and careers.

We are honored to inaugurate this season with guest curator Zackary Drucker. Drucker is an independent artist, cultural producer and trans woman who has performed and exhibited her work internationally in museums, galleries and film festivals including the Whitney Biennial 2014, MoMA PS1 and Hammer Museum, among others. Drucker is an Emmy-nominated producer for the docu-series This Is Me, as well as a producer on Golden Globe- and Emmy-winning Transparent.