Good References and The Poor Nut 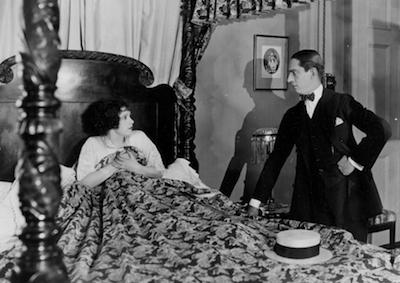 Constance Talmadge, one of the silent era’s most popular comedic stars, plays a down-on-her-luck working girl who impersonates a friend to take a job as a secretary to an elderly socialite.

A common scenario finds the bespectacled, shy bookworm with more talent for learning than athletics, dreaming hopelessly of dating the campus beauty. She, of course, is only interested in the big man on campus, often also the school’s star quarterback. The Poor Nut follows this pattern closely. Jack Mulhall plays Jack, a botany student in love with Julie Winters (Jane Winton), the beauty queen of the rival college. He writes (but never sends) love letters addressed to her, lying about his fraternity membership and athletic skills. As a prank, one of Jack’s letters is mailed to Julie, who responds and wants to meet. Knowing his dream girl will be looking for him when the two colleges compete in a track meet, Jack has to find a way to measure up to her expectations—and fast!

Rejecting conventional double standards, Julie seeks to indulge her own desires in meeting Jack, a man she hopes may be even more attractive than her current boyfriend, the star athlete of her college. A former Ziegfeld girl, Winton fits the part of Jazz Age coquette perfectly with her piercing eyes, bee-stung lips, and bobbed hair. In a rare appearance in a silent film, young Jean Arthur appears as a fellow botany student who admires Jack for his mind.

A mischievous vagabond infiltrates a bourgeois household in this newly discovered one-reel comedy by the pioneering female director Alice Guy.

Baby Peggy, one of the biggest child stars in movie history, does not disappoint in this charming silent comedy, even though it only exists in fragmentary form.