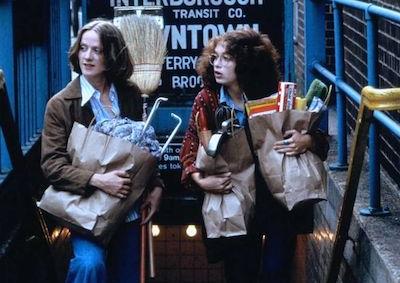 Inspired by a line from Eleanor Bergstein’s novel Advancing Paul Newman (1973), filmmaker Claudia Weill created a nuanced character study rife with the interdependency—and ultimately, rich in the empowerment—found in female companionship. Shot on 16mm film stock that enhances its warm, lived-in interiors, Girlfriends’ primary concern is the evolving relationship between amateur photographer Susan and dabbling poet Annie (charmingly actualized by Melanie Mayron and Anita Skinner) as they awkwardly maneuver into the unknown world of careers, marriage, and independence. Adored by the likes of Stanley Kubrick and influential to an entire generation of storytellers, this timeless ode to the unique power of female kinship remains a delightful milestone of late-’70s feminist filmmaking.

A Comedy in Six Unnatural Acts (1975)
Directed by Jan Oxenberg

Jan Oxenberg’s charmingly raw, politically-charged and remarkably funny celebration of the American lesbian experience validates the nuanced voice of a community otherwise underrepresented in the Wild West of mid-’70s independent filmmaking. In an attempt to combat the pervasive misconception of the “humorless, angry feminist,” the vignettes in A Comedy in Six Unnatural Acts experiment with self-aware yet playful depictions of common stereotypes, such as the “Stompin’ Dyke” or the butch-femme couple. In the process, Oxenberg’s short film reclaims those insults and assumptions as newfound, loaded weapons—to deploy on her own terms, of course.