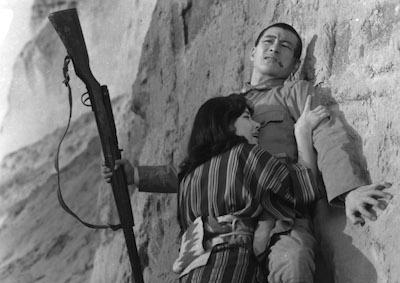 Part social realist drama, part sadomasochistic trash opera, Gate of Flesh (1964) paints a dog-eat-dog portrait of postwar Tokyo. The film takes the point of view of a gang of tough prostitutes working out of a bombed-out building. When a lusty ex-soldier lurches into its midst, the group’s most sensitive member is tempted to break one of its most important rules: no falling in love. From the women’s bold, color-coded dresses to the unorthodox use of superimposition effects and theatrical lighting, this is director Seijun Suzuki at his most astonishingly inventive.

Story of a Prostitute (Shunpuden) (Japan, 1965)
Directed by Seijun Suzuki

Yumiko Nogawa, one of director Seijun Suzuki’s favorite actresses, gives perhaps her most ferocious performance in this scathing portrayal of Japanese militarism during the lead-up to World War II. Sent with six other comfort women to service a garrison of some 1,000 men in Manchuria during the Sino-Japanese War, Nogawa’s Harumi is brutalized by a vicious lieutenant who wants her as his personal property. Meanwhile, she is falling in love with his gentle young assistant. The Taijiro Tamura novel on which the film is based was previously made into a much-sanitized film by Akira Kurosawa called Escape at Dawn (1950). Working in the B-movie arena allowed Suzuki to use the sex and violence expected from the genre to advance the view he shared with Tamura, as Tony Rayns put it: “that the sex-drive is a crucial part of the human will to live.” “This is the movie that proves Suzuki should be lifted out of the limiting category of the Asia Extreme cult directors, the ‘Japanese Outlaw Masters,’ and placed at the grown-ups’ table, alongside Kurosawa, Okamoto, and Kobayashi.” —David Chute, Criterion Current.