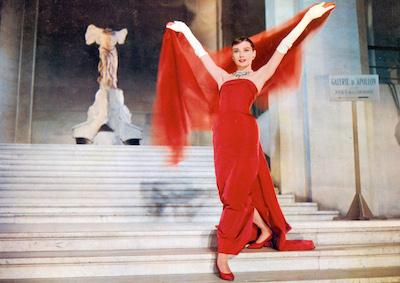 It wasn’t the norm to shoot musicals overseas, far from a Hollywood soundstage. But for portions of Funny Face, Stanley Donen, Audrey Hepburn and Fred Astaire went to Paris. Loosely inspired by Richard Avedon and his wife, the film tells the story of a fashion photographer and a New York intellectual, who reluctantly travels to Paris for a modeling job but really goes to study the philosophy of “empathicalism.” A dynamic synthesis of fashion, bodies in motion, and real locations captured in vibrant Technicolor and VistaVision, the film confirms that the late Stanley Donen was one of Hollywood’s greatest stylists.

Paris’ boulevards and Left Bank jazz clubs are the backdrop for director Martin Ritt’s exploration of race, liberation and artistic expression. Paul Newman and Sidney Poitier play jazz musicians who fall for two vacationing Americans while working the clubs in a culture where jazz music and players are celebrated beyond what they’ve experienced stateside. The hepcats’ battle royale with Louis Armstrong is a showstopper. Legendary French cinematographer Christian Matras shoots Paris in stunning black and white and Duke Ellington and Billy Strayhorn deliver one of the great jazz scores.