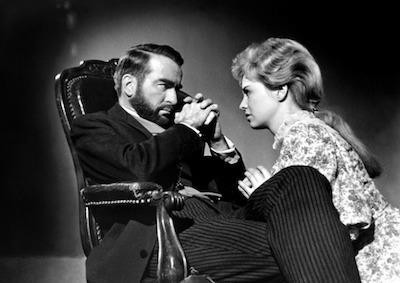 On its release, Time magazine praised Huston’s long-in-gestation portrait of Sigmund Freud as “a taut, intellectual thriller…directed with dominating intelligence,” placing it more in the line with the film noirs he had directed than the biopics he wrote (Dr. Ehrlich’s Magic Bullet, The Amazing Dr. Clitterhouse) while at Warner Bros. In Huston’s vision, Freud, played with penetrating intensity by Montgomery Clift, sifts through his own dreams and those of his patients like a detective on a case as he wrestles with the veracity and the implications of his emerging theories of infant sexuality and hysteria. The dark, baroque shadows of Douglas Slocombe’s cinematography drives home the comparison. A difficult production for both Huston and Clift, Freud is the director’s most enigmatic and compelling film and remains unjustly overlooked.