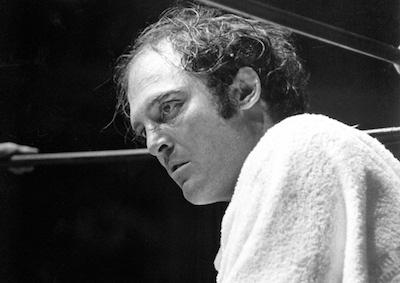 John Huston’s gritty account of small-time boxers stranded in the wasteland of rural California is a remarkably faithful adaptation of ex-fighter Leonard Gardner’s downbeat source novel. Stacy Keach stars as the has-been venturing a comeback. Jeff Bridges is the good-natured up-and-comer headed for disillusionment. Susan Tyrrell, however, manages to steal the show in an Academy Award-nominated supporting performance as a barfly surviving at the edges of this masculine world. Conrad Hall’s naturalistic camerawork receded from the action to better capture the squalid environment in which the film’s hard-boiled losers are hopelessly confined. Crafted in the style and spirit of New Hollywood realism, Fat City is a raw, unsentimental evocation of the pathos of failure.

A faithful adaptation of Flannery O’Connor’s much-celebrated 1952 novel, this nihilistic, late entry in Huston’s filmography (he was 72 years old on set) follows ambitious, uneducated war veteran Hazel Moats (Brad Dourif) as he becomes the sole preacher of the Church of Truth Without Christ, an evangelical outfit of his own invention. Virtually unseen by an entire generation until the Criterion Collection’s DVD release in 2009, the obsessive Moats and his futile rivalry with the sadistic Asa Hawks (Harry Dean Stanton) play out a grand story of fame and conviction on the small stage of Macon, Georgia.