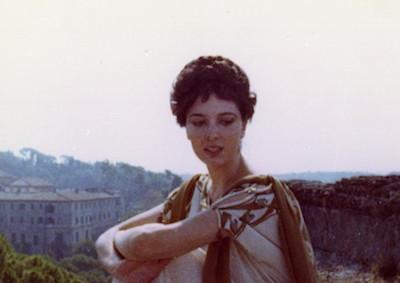 The cinematographer Renato Berta, a frequent collaborator of Straub and Huillet, presents the first film that the partners shot together in Italy (on the Palatine Hill of Rome), which was also the first they made in color. A faithful adaptation of Pierre Corneille’s Othon, the classic tragedy that premiered at the court of Louis XIV at Fontainebleau in 1664 and today is more hallowed than actually performed, Eyes do Not Want to Close… depicts the power vacuum that followed Emperor Nero’s death. Against a crowd of obsequious and scheming pretenders to the throne, Corneille has Camille as his epic heroine, the mother of all conscientious objectors.

An extended shot from a car coursing through the streets of Rome in 1972 — which is to say, the ancient Republic in ruins — sets the stage for Straub-Huillet’s complex interpretation of Brecht’s unfinished experimental novel, The Business Affairs of Mr. Julius Caesar. The work explores history as it has been written by the victors, with their hero worship of tyrannical leaders (whether Caesar or Hitler), and offers an alternate view of history writing as fractured and potentially revolutionary. Caesar’s former slave and former banker are both featured, providing their own differing perspectives on the Emperor’s career in the political, economic and military life of ancient Rome.