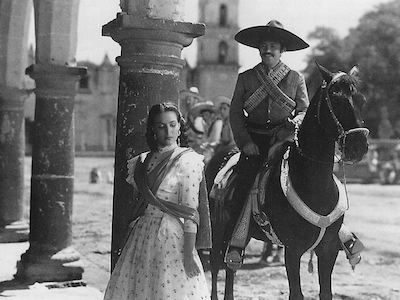 Enamorada, which translates as “A Woman in Love,” is a loose adaptation of The Taming of the Shrew. Macho man and Mexican revolutionary General Reyes (Armendáriz) conquers the pueblo of Cholula, then falls hopelessly in love with Beatriz Peñafiel, the daughter of the richest and most conservative man in town. Embodied by María Félix, she knocks him off his feet with a slap after he whistles at her, then literally blows him off his horse with a bomb. Hollywood called it “meeting cute.” The “taming” here consists of the General getting down on his knees repeatedly and asking her for forgiveness for all the atrocities he has committed. She does fall eventually, signaled by an extreme close-up of Beatriz awakening to love, as Reyes serenades her under her window. The final scene pays homage to Josef von Sternberg’s Morocco (1930), but this is one of the masterpieces of Mexican cinema. This 35mm print, wet-gate contact printed directly from the original nitrate camera negative, represents the first stage in the restoration of Enamorada, a process that began in 2017.

Both the patrón of a Mexican ranch and his foreman love the same girl, but what is her preference? Through a clever combination of romance, comedy, musical performance, idyllic hacienda setting and recognizable cultural types, this film created the template for the comedia ranchera genre that would soon become a staple of Mexican cinema. By all accounts, Allá en el Rancho Grande was also the catalyst that kick-started the Mexican Golden Age, while it also revolutionized and invigorated Spanish-language film exhibition in Los Angeles through a symbiosis between cinema, popular music, live theater and star appearances. Billed in local newspapers as the film that will “make you feel more Mexican,” its local promotion also capitalized on the nostalgia of immigrant audiences. Drawing on the popularity of Mexican regional music in the U.S., Rancho Grande would also become a model emulated by Hollywood in its production of Pan-American musicals in the 1940s.