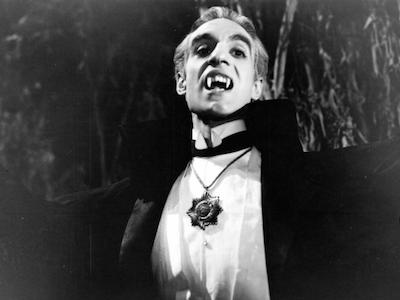 Two strangers find themselves stranded at the Sierra Negra train station just before nightfall — until a horse-drawn carriage arrives for a mysterious shipment of soil from Hungary and reluctantly offers the duo transport into the Black Mountains. Presupposing an audience familiar with all the warning signs of impending doom, director Fernando Méndez quickly evolves the established tropes of the cinematic Nosferatus and Draculas of yore to reshape our contemporary understanding of the vampire figure. Considered a classic of mid-century Mexican horror, El vampiro features a blood-sucking Count Karol de Lavud as one of the first to flash his elongated incisors before feeding on his unsuspecting prey, setting an imitable new standard for this sub-genre of gothic horror. The trend was taken beyond Mexico and would catch on internationally, given a particularly robust representation among the musty sarcophagi, foggy landscapes and creepy cobwebs so abundant in the Hammer horror pictures of the 1960s and ’70s.

A research scientist, Federico Gascón, is sent by his pharmaceutical company into the jungles around Veracruz to find barbasco roots, which are exploited for the production of cortisone. In the 1950s, a huge steroid industry developed in Mexico out of the harvesting by campesinos of these diosgenin-rich yams. Federico gets lost in the jungle and his partner is killed by a snake, before he comes upon a strange young woman, Yáscara, with whom he eventually falls in love, and her father, who tries to kill him. Ricardo Montalbán, who had become a major Hollywood contract star at Metro-Goldwyn-Mayer, albeit in films below his talent, returned to Mexico at the invitation of the Calderón Brothers to star in this erotic jungle adventure film. According to production records, Norman Foster wrote the first script, which was to be produced for 1.8. million pesos, originally in color and two versions (Spanish and English), but cost overruns limited the production to black and white and Spanish only.