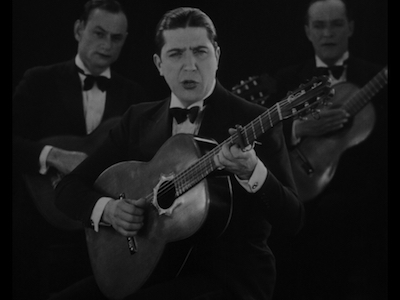 Before his tragic death in an airplane accident, the legendary Argentine singer Carlos Gardel starred in several American-made Spanish-language features that, in addition to contributing to the popularity of sound films in Argentina, were extremely successful across Europe and Latin America. Released in July 1935, a few weeks after the singer’s death, El día que me quieras was an international hit. Produced by Gardel’s own company, Éxito Productions, and distributed by Paramount, the film narrates the vicissitudes of a singer who marries a dancer against his father’s wishes. Although screenwriter Alfredo Le Pera was not satisfied with some of John Reinhardt’s directorial choices, nor with the film’s final cut, many consider it Gardel’s greatest film, including the singer himself, who, five days before his death, wrote to his agent: “I still think that it is my best work in films, and that we have topped everything with its songs.”

Before signing his first contract with Paramount in 1931, Carlos Gardel starred in 10 shorts considered by several film historians to be the first Argentinian sound-on-film productions. Filmed between October 23 and November 3, 1930, each of these simple shorts feature the performer, accompanied by either his guitarists or Francisco Canaro’s orchestra, singing one of his songs. However, the crew faced numerous problems during filming: the camera turned out to be too noisy and a booth had to be rapidly made to isolate it, thus impeding camera mobility. Also, due to the set’s limitations, cinematographer Antonio Merayo was forced to flood it with light, making the temperature almost unbearable. But probably the worst incident occurred when five of the 15 shorts originally filmed were destroyed by the lab during processing. The remaining shorts were shown in cinemas prior to the main feature, and, after the singer’s death, were compiled under the title Así cantaba Carlos Gardel.