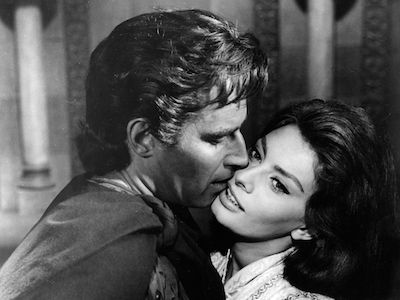 One of the great super-productions of the postwar era, the film explores the lives of Spanish warrior El Cid (Charlton Heston) and his wife (Sophia Loren) in a feudal Spain that was divided into Christian and Muslim kingdoms. Director Anthony Mann and producer Samuel Bronston, who became a studio mogul in Spain, shot the film’s violent action and spectacular pageantry amongst medieval castles and grand landscapes. With a cast of thousands (the Francoist Spanish army in medieval armor), it’s the physical pinnacle of the historical epic that pits heroic nobility against perverse cruelty.