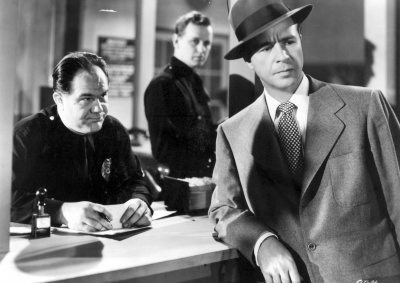 An insurance agent (Fred MacMurray) falls hard for a married woman (Barbara Stanwyck, playing hot), itching to get rid of her husband. Then, he falls even harder, after committing the perfect crime. Raymond Chandler’s adaptation of James M. Cain’s novel passes through the hard-boiled school of two American masters, before director Billy Wilder adds his own Central European Jewish exile view of moral ambiguity.

A claims adjuster for an insurance company (Dick Powell) falls hard for Mona (Lizabeth Scott), who he is supposed to be investigating, and ends up involved in embezzlement and murder. It is the story of a clerk, dreaming to break out of his tired bourgeois existence, as first given form in German expressionist films like Die strasse (1923). However, the noir city has been supplanted by a darker suburbia.