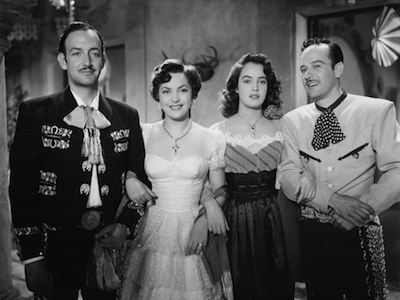 Two old friends break up when one marries the girlfriend of the other. A key example of the comedia ranchera genre, Dos tipos de cuidado is the only film in which legendary Mexican film stars Pedro Infante and Jorge Negrete appear together. Capitalizing on their popularity as Mexico’s most famous singing charros, the film stages a famous musical duel between the two, in which they trade clever insults and double entendres. Despite the onscreen romantic rivalry between them (a staple of the comedia ranchera), the two stars supposedly decided to appear in the film together to refute rumors of their mutual animosity off-screen. Both Infante and Negrete had a loyal following in Los Angeles. In fact, Negrete’s untimely death in 1953 occurred in Los Angeles, where he was scheduled to appear at the Million Dollar. Curiously, the film was produced by Miguel Alemán Jr., son of the Mexican president in office at the time.

A door-to-door salesman comes to the house to hawk an American vacuum cleaner, convincing the daughter of the household that the machine will improve their lives. However, because the daughter received the salesman without a chaperon, a traditional Mexican family is thrown into turmoil. Things get worse when the salesman announces to the pater familias that he plans to marry the daughter. Alejandro Galindo, who trained with Hollywood director Gregory La Cava at the beginning of the sound period, serves up a melodrama about the clash between Mexican family and religious values and the postwar intrusion of American-style modernity. As the English translation of the title, “A family like many others,” indicates, this middle-class Mexican family symbolizes a cultural shift away from traditional European values towards American consumerism, and the generational conflicts engendered by that shift.