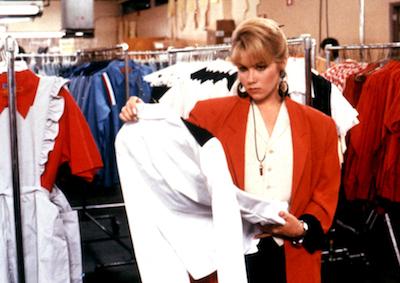 Primarily remembered as a coming-of-age comedy with some great one-liners (“Dishes are done, man!”), Don’t Tell Mom equally considers what it means to quickly assume adult responsibility — thanks to the necessity of work. Reality sets in fast for the five Crandell kids when their summer caretaker suddenly bites the dust. Now without supervision or any spending money, the eldest of the kids, Swell (a confident Christina Applegate), has to take a job just to put massive bowls of cereal on the table. Lying about her age and experience to get a job at an apparel company, this newly-minted working teen suddenly finds herself in too deep when her co-workers suspect she might not be the woman on her (heavily doctored) resume.