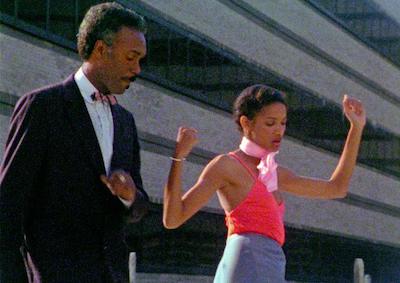 Whip-smart network television research librarian Bunny Watson (Katharine Hepburn) finds her highly specialized job threatened when an efficiency expert (Spencer Tracy) begins sizing up both her brain and her office space, hell-bent on replacing the entire department with a supercomputer. Only glorious CinemaScope can truly showcase the massive scale of the “Electromagnetic Memory and Research Arithmetical Calculator” (early IBM prototypes were provided to Fox for the shoot) so intent on bringing Bunny and her fellow bibliosophs into complete obsolescence in this final Tracy-Hepburn workplace gender comedy, and their eighth of nine films together. Perfectly tailored for the duo’s renowned repartee and saturated with color throughout, Desk Set remains a cheery showcase of female workplace competency.

Detailing complications in the life of a Black, female philosophy professor (Seret Scott) and her philandering painter husband (Bill Gunn), this profound feature is groundbreaking in its depiction of women’s sexuality, her all-consuming preoccupation with work and study, and the complications of marriage — not to mention its equanimity for all its characters. Never theatrically released in its time, this lyrical film by filmmaker and playwright Kathleen Collins offers a more complicated consideration of obsolescence: How might we reclaim relevance when the men in our lives don’t respect our pursuits as much as their own? This rarely-expressed view of Black feminine agency makes for a refreshing, intimate take on a modern woman searching for the intellectual and creative output she finds most fulfilling.