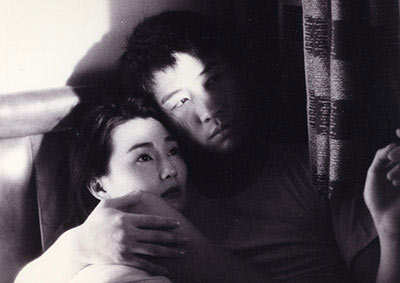 Made one year before the handover of Hong Kong to the Mainland, prolific Second Wave filmmaker Peter Chan’s tender, lyrical boy-meets-girl chronicle garnered nine prizes at the Hong Kong Film Awards, including Best Director and Best Actress. Leaving his fiancée back home in Beijing, wide-eyed Xiao Jun (Leon Lai) arrives in Hong Kong from the Mainland in 1986 to pursue his dreams of making a comfortable life for his future family. He soon meets the ambitious, shrewd and hard-working Li Qiao (Maggie Cheung), who turns out to be a fellow Mainlander. The friendship between Xiao Jun and Li Qiao, made more intimate by their mutual physical dislocation and experience of urban isolation, quickly escalates into a heated love affair that spans a decade and the vast distance between two islands in transition—Hong Kong and New York City—as the couple separate and reconnect with each other in unexpected circumstances. Its soundtrack filled with the warm and nostalgic songs of pan-Asian singing sensation Teresa Teng—whose tragically early passing during production inspired Chan to change the film’s Chinese title to that of one of her best known songs (“Tian Mi Mi”)—Comrades is both a spellbinding romance and a scintillating snapshot of Hong Kong, capturing the megacity’s palpable anxiety and disorientation on the brink of profound historic change.

35mm, in Cantonese and Mandarin with English subtitles, 118 min.

Filmmaker Wong Kar-wai’s masterpiece of romantic longing is a love letter to much of Chinese cinema history. Its tale of a man and a woman (Tony Leung Chiu-wai and Maggie Cheung), crammed into adjacent tiny apartments, their spouses embroiled in an affair and their own passions repressed by tradition, propriety, and a fear of the unknown, echoes a tradition of wenyi melodrama stretching back to the 1930s. The film has a deep, almost fetishized relationship with the postwar period—especially its clothing and interior design—that speaks to the continuing weight of history and memory in contemporary Chinese filmmaking. (Critic Stephen Teo astutely identifies the film’s deep formal echoes of Fei Mu’s postwar masterpiece Spring in a Small Town, further underlining this connection). But In the Mood’s most profound connection to the past is in the intoxicating performances of Leung and Cheung, whose grace and vulnerability conjure up the aura of vanished stars from the Golden Age of Shanghai cinema in the ‘30s and ‘40s. Displaying Wong Kar-wai at the height of his powers, his extraordinary control over mood, tone and gesture felt in every frame, In the Mood for Love was recently anointed as the most important Chinese film on Sight & Sound’s decennial poll of the greatest films ever made. “Rhapsodically sublimated and ultimately sublime” (J. Hoberman, The Village Voice).

35mm, color, in Cantonese and Shanghainese with English subtitles 98 min.