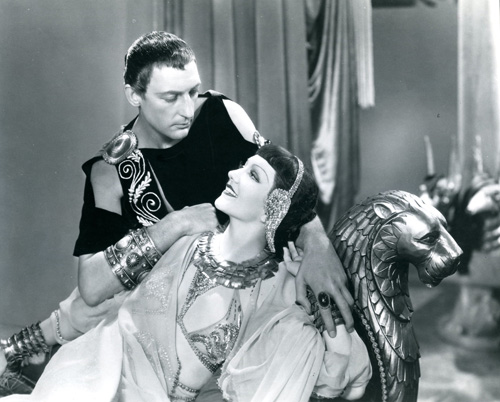 Queen Cleopatra (Claudette Colbert), her position in Egypt compromised by the ambitions of her brother Ptolemy, makes lovers of both Julius Caesar and (following his death) Marc Antony, by way of consolidating her power. But love has its way with her, and Cleopatra is undone by the very weapon she previously wielded. A fever dream combining Egyptian references with art deco flourishes, the film showcases coquettish Colbert to perfection.

Followed by:
The Sign of the Cross (1932)
Directed by Cecil B. DeMille.

Hedonistic Roman Emperor Nero (Charles Laughton) cruelly persecutes adherents of the upstart Christian religion. When Roman prefect Marcus Superbus (Frederic March) encounters beautiful Mercia, a devout Christian, his sympathetic attentions arouse the jealousy of Empress Poppaea (Claudette Colbert), who desires him. The heated drama climaxes at the arena where Christians and others are sacrificed amid perverse and savage games. A smash hit, the film proclaimed director Cecil B. DeMille’s triumphant return to Paramount, where his career had first blossomed, following a period of independent production and a brief period at Metro-Goldwyn-Mayer. The film also features a quintessential DeMille flourish: Poppaea’s sensous bath in a sunken tub filled with asses’ milk.

Note: Mark A. Vieira will be signing copies of the book, Cecil B. DeMille: The Art of the Hollywood Epic, beginning at 6:30 p.m.