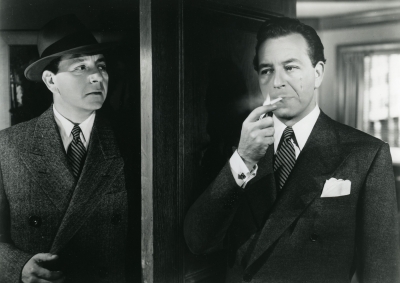 Chicago cop, Johnny Kelly (Gig Young), dreams of escaping his boring job and wife and going to California with a nightclub stripper he’s infatuated with (Mala Powers). However, his last day on the job changes everything, as Johnny gets involved with gangsters and a crooked district attorney. Like The Naked City (1948), this noir features a gritty, realistic look at the city’s low-lives through location photography and harsh lighting.

Recently released from prison and involved in the robbery of a mobster’s casino that has gone bad, John Muller (Paul Henreid) takes on the identity of psychiatrist Dr. Bartok, after killing him. His new identity, however, brings him no peace, Bartok having his own problems with gangsters. Like many film noir heroes, Muller can’t escape fate as he becomes entangled in a web of his own making.