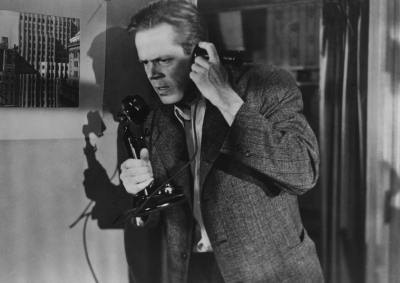 Bill Cannon (Dan Duryea) is a loser and an alcoholic whose wife and child have left him. When his wife calls to say that their child is in the hospital, Bill desperately tries to raise the money for his phone bill, so he can stay in touch. Filmed in the seediest parts of Los Angeles’ old Bunker Hill, director John Reinhardt’s film is as much neo-realist as noir, the environment reflecting the hero’s emotional state.

Wealthy New York socialite, Leona Stevenson (Barbara Stanwyck), is psychosomatically bedridden, married to a socially inferior husband who may be embezzling. After overhearing two thugs plot a murder on the phone, Leona desperately tries to warn the victim, only to realize that it is she. Claustrophobically structured in seemingly real time as a series of telephone calls, director Anatole Litvak’s film speeds to its depressing conclusion.