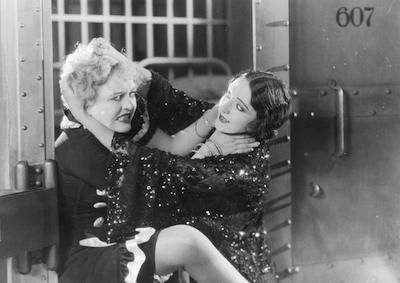 Before becoming a Broadway musical and an Oscar-winning film, the story of Roxie Hart was a 1926 play by Maurine Watkins, based on true events, which in turn inspired this film version. Phyllis Haver plays notorious Roxie Hart, a spoiled flapper who pumps her sugar daddy full of lead after he gives her the air, and now depends on mercenary lawyer Billy Flynn for her only chance at acquittal.

Applause is a showcase for the acting and singing talents of 29-year-old Helen Morgan in her film debut, playing a faded burlesque queen. Also making his screen debut was director Rouben Mamoulian, whose depiction of the vulgar, entertaining realities of burlesque is as impressive today as it was in 1929, when it established his reputation as an innovative film director.

Note: live musical accompaniment provided by Cliff Retallick for the silent portion of this program.