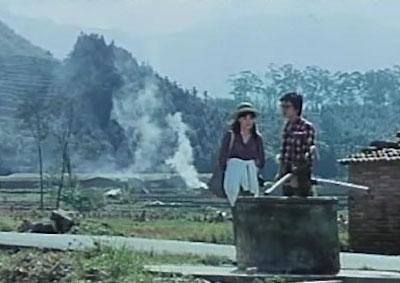 The trappings of a standard-issue romantic comedy are made delightful by delicate direction in filmmaker Hou Hsiao-hsien’s first feature. Fleeing an arranged marriage, an attractive urbanite (played by singer Feng Fei-fei) meets a rural surveyor (pop star Kenny Bee), who falls in love with the glamorous, restless out-of-towner. When her fiancé arrives on the scene, misunderstandings mount, setting up Hou’s close observation of social types and behaviors.

In Mandarin with English subtitles, 90 min

Director Hou Hsiao-hsien’s second feature reunites the co-stars of Cute Girl (1980) in a breezy, big-hearted and quirky rom-com. Assigned to photograph a television commercial in a provincial town, a female photographer is taken with the blind, non-professional performer who is made the subject of the ad campaign. The director makes resourceful use of verdant rural topography and hip music tracks to underscore the protagonists’ unlikely bond.

In Mandarin with English subtitles, 90 min.