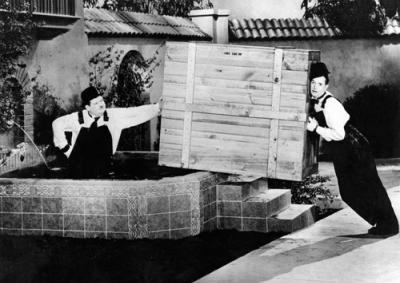 UCLA Film & Television Archive continues its long-term initiative to restore the legacy of Laurel & Hardy, working with negatives that have survived (sometimes only barely) decades of abuse and neglect. This major restoration effort is supported by the Archive’s Laurel & Hardy Preservation Fund. In this program, we showcase the latest projects restored via this ongoing effort.

In the Spanish-language version of Laurel & Hardy’s first feature film Pardon Us, Stan and Ollie find themselves in the clink after a bootlegging endeavor goes awry. A loose tooth that makes Stan blow a raspberry every time he speaks gets the boys deeper and deeper in trouble with the warden and fellow inmates, as they are haplessly embroiled in the breakout schemes of a notorious prisoner.

Preceded by
The Midnight Patrol (1933)
Directed by Lloyd French.

Novice police officers Laurel & Hardy have an eventful evening when they’re called to investigate a housebreaking.

In this Academy Award-winning short, Stan and Ollie’s Sisyphean efforts to deliver a piano to the home at the top of an impossibly long staircase are stymied by passersby, the police and the topography itself.