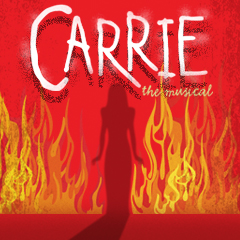 Plagued by bullies at school and an oppressive mother at home, an awkward teenager finds her telekinetic powers and discovers she has the final revenge. Based on the smash novel, this musical delivers the legend of Carrie in a new and exciting way.

“A thrill ride…the musical version of a haunted house” — TheaterMania