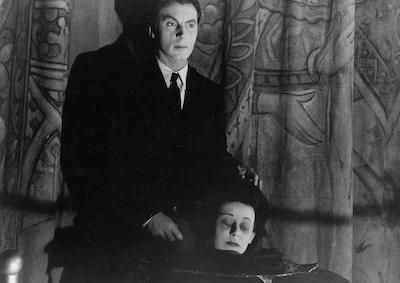 Foregoing the trademark creaking door opening of radio’s Inner Sanctum Mysteries in favor of a floating head attesting that “Yes—even you, without knowing, can commit murder!” the psychological terror of the Inner Sanctum carries over to Universal’s film adaptation, in which neurologist Mark Steele (Lon Chaney Jr.), after blacking out, finds his adulterous wife murdered and himself the prime suspect.

Followed by:
The Frozen Ghost (1945)
Directed by Harold Young

A guilt-ridden stage mentalist (Lon Chaney Jr.) and a disgraced plastic surgeon (Martin Kosleck) are two key figures in the strange goings-on at a wax museum. When the eccentric owner of the museum disappears, the ensuing intrigue illuminates the Inner Sanctum’s traffic in suggestion, hypnosis, and the power of greed, jealousy and revenge to drive ordinary people to do extraordinary things.