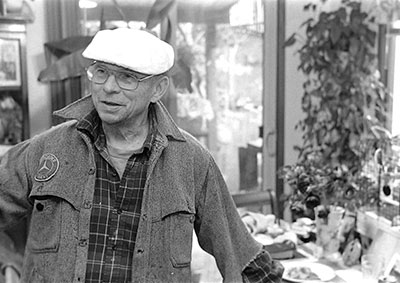 “One-year journey through the land of incessant progress, researching those sources which have given rise twenty years later to the essential question of survival.” — B.B. on Quixote (1965).

Regarded as the father of the ’60s West Coast experimental/lyrical film movement and co-founder of Canyon Cinema, Bruce Baillie’s virtuoso command of the 16mm film medium has introduced generations of viewers to the wider possibilities of a cinema that is both intensely personal and socially conscious. In anticipation of Baillie’s upcoming in-person appearances at the REDCAT (November 3 and 4), and part of a three program retrospective, UCLA Film & Television Archive will present three early masterworks: his rarely-screened and haunting first film, On Sundays (1961), the landscape meditation To Parsifal (1963) and Quixote (1965), Baillie’s sumptuously layered, epic road poem on mid-century America and Americana, and others.