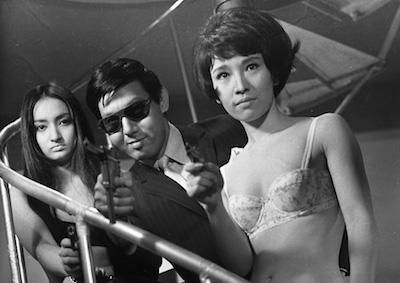 This fractured film noir is the final provocation that got director Seijun Suzuki fired from Nikkatsu Studios, simultaneously making him a counterculture hero and putting him out of work for a decade. An anarchic send-up of B-movie clichés, it stars Jo Shishido as an assassin who gets turned on by the smell of cooking rice, and whose failed attempt to kill a victim (a butterfly lands on his gun) turns him into a target himself. Perhaps Suzuki’s most famous film, it has been cited as an influence by filmmakers such as Quentin Tarantino, Jim Jarmusch, Park Chan-wook and John Woo, as well as the composer John Zorn, who called it, “a cinematic masterpiece that transcends its genre.”

Youth of the Beast (Yaju no Seishun) (Japan, 1963)
Directed by Seijun Suzuki

Director Seijun Suzuki himself claims that 1963 was the year when he truly came into his own, and Youth of the Beast is one of his breakthroughs. In his second collaboration with the director, Jo Shishido rampages through the movie, playing a disgraced ex-cop pitting two yakuza gangs against each other to avenge the death of a fellow officer. As the double and triple crosses mount, Suzuki fills the frame with lurid colors, striking compositions and boldly theatrical effects that signal a director breaking away from genre material to forge a pulp art form all his own.