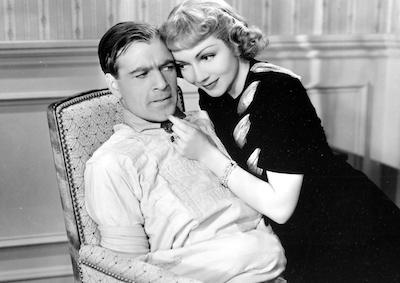 When wealthy playboy Michael (Gary Cooper) falls in love with the impoverished Countess Nicole de Loiselle (Claudette Colbert) and takes her as his eighth wife, she has other plans when she realizes she is No. 8, namely to withhold sex until he actually falls in love with her, or divorce him with a big alimony check. Try as she might, though, she can’t convince him of her infidelity and he is challenged by her marital indifference. Despite Cooper being slightly miscast as a serial husband, Lubitsch’s only attempt at a real screwball comedy is better than its reputation in some quarters. The opening scene in a men’s clothing store (an idea Billy Wilder contributed) has been called “the greatest meet-cute in Hollywood history” by Lubitsch biographer Scott Eyman: Michael wants to buy the lower half of a pajama and not pay for the top half, leading to an impasse until Nicole steps in to purchase the upper half.

The mythical Central European Kingdom of Marshovia is on the rocks unless its wealthiest citizen, Madame Sonia (Jeanette MacDonald), returns from her extended stay in Paris and infuses cash. The situation is so grave that the Prime Minister sends Prince Danilo (Maurice Chevalier) to woo, bed and wed the merry widow. Stroheim had filmed Franz Lehár’s operetta straight and silent for MGM in 1924, whereas Lubitsch goes for musical comedy, adding his customary basket of innuendos. But the Hays Office forced MGM to remove three minutes of footage after the film’s premiere. Happily, the negative was not touched, so reissue prints were Lubitsch’s cut. After three films together, Chevalier was not thrilled to be working with Lubitsch again and let his feelings be known in the press, while MacDonald was also less than ecstatic about her male partner, who couldn’t keep his hands to himself. Costing $1.6 million, the film grossed $2.6 million, but still lost money on paper.