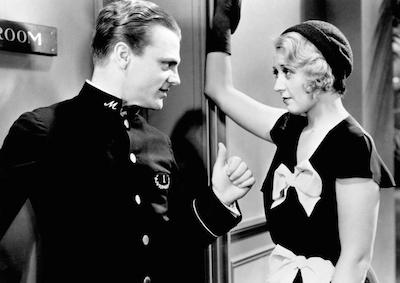 Three years and two dozen films into her contract at Warner Bros., Blondell landed her first starring role as an orphaned waif made bitter by poverty and indifference who fights her way to the top of an organized crime syndicate. Blondell biographer Matthew Kennedy describes Blondie Johnson as a “female Little Caesar” and the role showcased Blondell’s range, adding dramatic punch to the wised-up wit she was known for.

Joan Blondell and James Cagney achieve peak sizzle in their fourth outing together at Warner Bros. as a pair of con artists at work in the “age of chiselry.” A hotel maid who throws in with Cagney’s larcenous bellboy, Blondell displays the unique alchemy of her persona, playing the better angel of his nature while confidently taking the world for a ride.

On his first wide-eyed night in New York, a small town boy (Eric Linden) falls in with a mob of showgirls and hustlers who leave him to take a murder rap after a wild party. Joan Blondell takes pity on him — or maybe she’s falling in love — and leads him through woods in this pulpy pre-Code quickie.