A Tree Grows in Brooklyn and Three Girls About Town 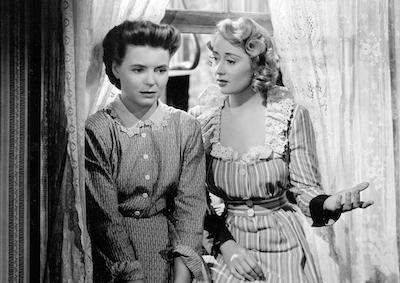 A Tree Grows in Brooklyn (1945), directed by Elia Kazan

Director Elia Kazan’s feature debut was also a welcomed opportunity for Joan Blondell to prove herself in a prestige picture. While she later noted that some of her best scenes as Aunt Sally, the black sheep member of the Nolan clan, were cut under pressure from censors, she steals the film whenever she’s onscreen as the family’s voice of hard-won experience.

This screwball comedy finds Joan Blondell playing the eldest of three sisters who work as “convention hostesses” in a busy hotel simultaneously holding gatherings of morticians, magicians and labor leaders whose negotiations have implications for national security. All three calamitously collide after Blondell discovers a body in an adjoining room and tries to hide it hoping to avoid scandal.