Black Sin and The Death of Empedocles 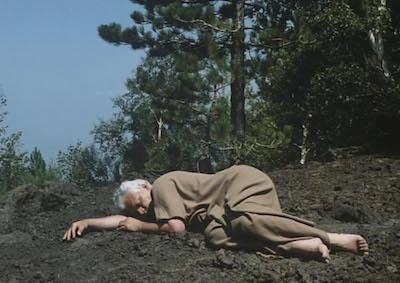 Straub-Huillet filmed the third version of The Death of Empedocles, the unfinished late-18th-century play by the German lyric poet Frederich Hölderlin, in the dazzling sunlight and mottled shadow of the Sicilian landscape. It was there that the Greek pre-Socratic philosopher Empedocles legendarily cast himself into the volcanic fires of Mount Etna to prove his immortality. Empedocles debates Pausanias, his loyal disciple (erômenos), about the divine powers of love and strife that govern all matter, whether the strange and mystical elements of air, fire, water and earth, or the mercurial and tragic behavior of gods and humans, mad in their compulsion to forsake nature and each other. Black Sin is a meticulous rereading and reworking of a play whose first version Straub-Huillet had adapted in The Death of Empedocles (1986).

The Death of Empedocles, or When the Green of the Earth Will Glisten for You Anew (West Germany/France, 1986)
(Der Tod des Empedokles; oder: wenn dann der Erde Grün von neuem euch erglänzt)
Directed by Jean-Marie Straub and Danièle Huillet

The pre-Socratic Greek philosopher Empedocles possessed magical healing powers through his communion with the gods and nature. He inspired awe and trust in the people by prophesizing a vision of a new Earth, a communist utopia, before committing a noble suicide. However, at the start of Straub-Huillet’s mesmerizing film — an adaptation of the first version of Hölderlin’s tragic poem, written during the outbreak of the French Revolution—Empedocles is at the point of death. An enemy of the priestly state, he is cast into darkness, suffering the torments of loneliness and doubt, but finds renewed strength, even immortality, through the will of the people.