‘Beat the Devil’ and ‘The List of Adrian Messenger’ 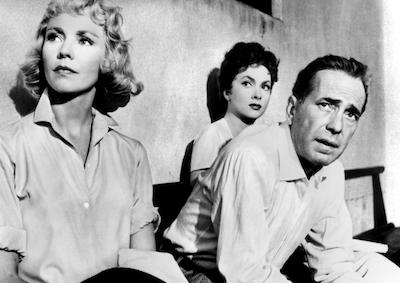 In a letter during post-production to Humphrey Bogart, the star of Beat the Devil and its principal financier through his production company Santana Pictures, Huston hedged his bets on the film’s chances for box office success: “It wasn’t at all the kind of picture it started out to be.” Indeed, what started off a serious thriller in the mode of The Maltese Falcon (1941) became, in the hands of Huston and Truman Capote, brought on to do a full rewrite, a broad spoof that cut down to size a wide swath of Huston’s previous work, from The Maltese Falcon to The Treasure of the Sierra Madre (1948). In the vein of Falcon, a motley group of international swindlers vie with one another for the rights to a uranium mine on their way from Italy to Africa. Capote and Huston were writing scenes and dialogue just ahead of shooting, giving the whole affair a playfully improvised feel, with Huston taking license to indulge his eccentric sense of humor. Preview audiences, however, were baffled and the panicked filmmakers reworked the film as an extended flashback with Bogart providing a voice-over narration. A box office disaster on its initial release, Beat the Devil reemerged in the coming decades as a cult film, embraced for its camp sendup of Hollywood conventions. It’s presented here in a new restoration, by Sony Pictures Entertainment in collaboration with The Film Foundation, which returns it to the original version seen by preview audiences.

The List of Adrian Messenger (1963)
Directed by John Huston

A thriller with its tongue planted more firmly in its cheek than Beat the Devil (1954), The List of Adrian Messenger has been alternately received as a deeply personal project that holds the key to Huston’s central concerns, or as a light goof taken on after the rigors of Freud (1962), that allowed Huston, as art director Stephen Grimes put it, “to get in a little fox hunting and work at the same time.” Perhaps it’s both. George C. Scott stars as a Scotland Yard detective on his own hunt for a master of disguise who’s killing off all the heirs between him and a large English estate. Producer Ed Lewis and Huston elevated the idea of hidden identity into a meta commentary on the film itself — as well as marketing gimmick — by rounding out the film’s list of suspects with big stars playing in heavy makeup, including Burt Lancaster, Kirk Douglas, Tony Curtis, Robert Mitchum and Frank Sinatra. The film concludes with an announcement — “That’s the end of the picture, but it’s not the end of the mystery” — before each of them peels away their makeup to take a bow.