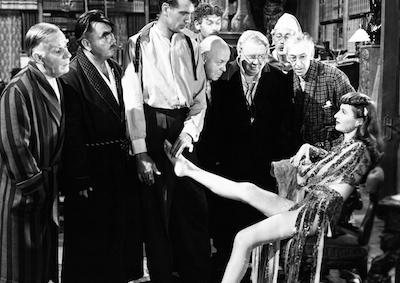 In this screwball spin on Snow White and the Seven Dwarfs, Barbara Stanwyck triumphs as burlesque singer Sugarpuss O’Shea who goes into hiding at the residence of a linguistics professor, Bertram Potts (Gary Cooper), and his seven scholarly colleagues. Potts is seduced by O’Shea’s "brilliant mind" through her witty vernacular of New York street slang. Their budding romance is thwarted when her gangster boyfriend demands marriage to prevent her from testifying against him. Produced by Samuel Goldwyn and written by Billy Wilder and Charles Brackett, the film typifies a prestige "A" class production that appealed to freelance talent like Stanwyck, who used her contractual muscle to negotiate for Edith Head to design her clothes in the film that redefined her sex-symbol persona.

In her last film for Paramount, Carole Lombard plays pathological liar and fiction writer Helen Bartlett who is married to an honest, but broke lawyer (Fred MacMurray). She secretly gets a job behind his back to help with their finances only to land in jail with a murder charge. Although her husband steps in as her defense lawyer and wins her case, Helen’s constant lying continues to strain their relationship. Built entirely around Lombard’s new screwball comedienne persona, True Confession brought together Paramount’s top talent and also featured the actress’ personal choices for her cinematographer (Ted Tetzlaff) and designer (Travis Banton), guaranteed by her freelance contract.