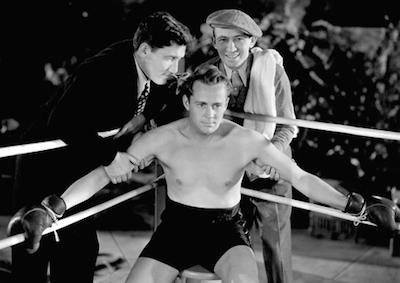 Middle-aged playboy Andrew Hoyt, who had previously been a staunch bachelor, gets sucked into marrying a beautiful but vacuous young blond, after her older sister has expertly set the bait. Realizing pretty quickly that he is not up to the vigorous physical activity demanded by his eager 20-something spouse, he conspires with his best friend and his loyal secretary to find a new plaything for the soon to be ex-wife. Adolphe Menjou plays the self-centered playboy with his tongue delightfully deep in his cheek, knowingly riffing on his own previously established screen persona as the suave older lover, but unafraid to also exhibit the frailties of advancing age. The scenes of the California honeymoon, during which the blond energizer bunny and the world-weary lounge lizard engage in ceaselessly healthy sports activity are particularly funny. Joan Marsh looks like a carbon copy of Jean Harlow, only twice as dumb, a girl who just wants to have fun. Meanwhile, Minna Gombell’s gold-digging older sister stage manages her younger sibling’s marital career, but can’t stave off disaster when the girl falls for some fresh young Latin eye candy in the shape of Don Alvarado as a rumba teacher.

Directed by Sidney Lanfield, Society Girl is a tale of middleweight boxing contender Johnny Malone (James Dunn), who falls for the high-class society girl Judy Gelett (Peggy Shannon) in Fox’s take on the short-lived Broadway play of the same name. Johnny begins spending too much time with Judy, which distracts him from his training and leads to a rift with his manager Doc Briscoe, played by a still relatively unknown Spencer Tracy. Briscoe fears that the society girl’s affections for Johnny are nothing more than a passing fancy. Judy, however, has begun to develop real feelings for him, but plans to dump him anyway, fearing that her society friends would mock the unrefined boxer. Seeing heartbroken Johnny quickly knocked out in the championship match, Judy changes her mind.