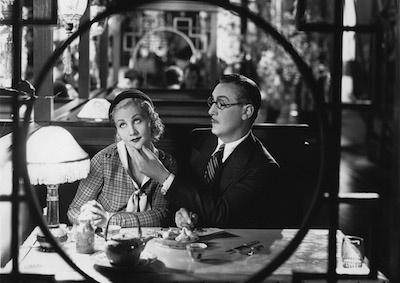 “Why don’t we talk this over?” Purred with a coquettish glance, this repeated refrain from power-hungry Lily Powers (a fiery Barbara Stanwyck) assists her climb from hometown barmaid to big-time secretary as she sleeps her way to the top floor of Gotham Trust in one of the most infamous pre-Code dramas of all time. In an era when a woman’s glove hitting the floor was considered salacious, Baby Face is downright lewd, with various implied sex acts and an overriding Nietzschean outlook on individualism and willpower. Considered lost, save for a hacked-and-slashed censored print, this uncut version of Baby Face has been preserved from materials discovered at the Library of Congress in 2004, when it was returned to its original, indecent glory.

Preserved by the Library of Congress.

Working-class sisters Mae and June Thorpe (Dorothy Hall and Judith Wood) take up residence in a home for single women, then go on the make for worthwhile jobs — and equally worthy men. Hitting and missing in both departments, the two take up with suitors both above and beneath their own stations (including one amorous employer), leading to heartache, catastrophe, and no particular lessons learned except the importance of supporting one another. Trying their hand at stenography and telegraph operation, the outlook for inexperienced women is bleak, but not hopeless. This pre-Code gem by pioneering filmmaker Dorothy Arzner offers a proto-feminist, Depression-era glimpse into the importance found in sisterhood through the lens of the only female director working in Hollywood at the time.