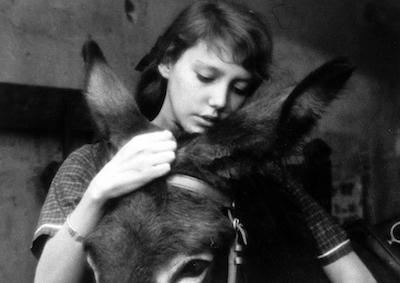 The inextricably intertwined lives of Marie (Anne Wiazemsky), a farmer’s daughter, and Balthazar, the donkey she befriends when a child, are at the center of Robert Bresson’s austere masterpiece of human cruelty, suffering and compassion. Marie and Balthazar share tormentors in their provincial village, including Gérard (François Lafarge), the local gang leader, whose brutish treatment of both, and their resignation to it, drives the film’s episodic narrative with unremitting fate. Saintliness and transcendence are ever present themes in Bresson’s modernist parable, while the powerful, emotional pull of Balthazar’s presence on screen raises intriguing questions about the nature of animal “performance,” particularly within the context Bresson’s famous use of non-actors.