Ata and Journey to the West 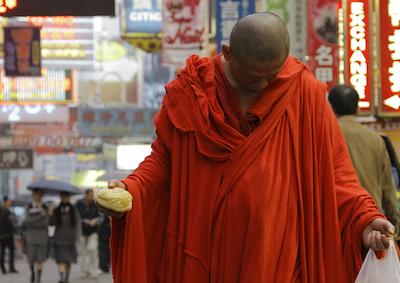 Tianyu is a sightless boy whose mother believes his only chance for a future is to become a champion disabled Ping Pong player. Tianyu has other ideas—envisioning a much wider world than his mother understands. When he goes missing, she is forced to see things as he does in this beautiful, spiritually suffused debut feature from Tibetan writer-director Chakme Rinpoche.

Journey to the West (France/Taiwan, 2014), directed by Tsai Ming-liang

Malaysian-Taiwanese auteur Tsai Ming-liang reinterprets the spiritual allegory of the classic Chinese novel Journey to the West as cinematic performance art. With mesmerizing slowness, a Buddhist monk (played by Tsai’s alter ego Lee Kang-sheng) inches forward through the streets of Marseille. Along the way Tsai’s camera reveals a delicate interplay of concentration, urbanism and everyday life.

Note: this screening takes place at the James Bridges Theater. Chakme Rinpoche will lead a group meditation open to audience members from 9–9:25 a.m. in the UCLA Sculpture Garden, adjacent to the theater where the film will screen at 9:45 a.m. Chai tea will be served after the meditation.