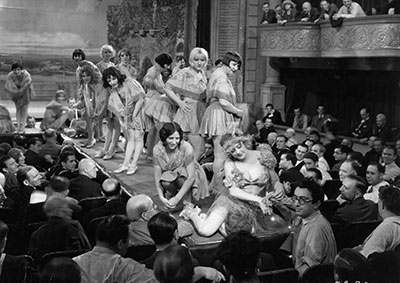 Rouben Mamoulian was one of a number of well-known Broadway directors recruited by the studios in the early years of sound. Unlike some stage veterans who were discomfited and soon driven back to the world of live theater by the unfamiliar demands of camera and microphone, Mamoulian was intrigued by the new medium, and applied himself to mastering and then expanding the expressive vocabulary of the talking film. For the rest of his career he alternated between stage (the original productions of “Porgy and Bess” and “Oklahoma!”) and screen (Love Me Tonight, Queen Christina, Becky Sharp, The Mark of Zorro, Silk Stockings) with equal facility.

Mamoulian had already established a reputation as an innovative director with his work for the Theatre Guild in the 1920s. Now, in 1929, as he began directing his first film at Paramount’s East Coast studio in Astoria, Long Island, he determined to restore movement to the art of the moving picture–something more experienced filmmakers had forgotten about as they ground out “all-talking” pictures to satisfy the public’s enthusiasm for sound. Shooting Applause Mamoulian experimented with long tracking shots and unusual camera angles (including what still seems a daring but dramatically effective overhead shot in the first reel), and invented multi-channel sound when he insisted on using two microphones in the same scene—one to record Helen Morgan singing a lullaby to her daughter, the other to record a little girl’s goodnight prayer. He further tried his primitive sound apparatus (and the patience of the technicians) in scenes photographed on location in Grand Central Station and the New York subway. Mamoulian was aided in his effort to breathe life into what might otherwise have been just one more dreary story of self-sacrifice and motherly love by his leading lady, also making her film debut, who fearlessly eschewed movie-star glamour to create a convincing and heartbreaking portrait of a woman caught in a losing battle with alcoholism and advancing middle age.

In reality, Helen Morgan was not yet 30 when she starred in Applause. Born in 1900, she had first gained fame as a singer in the speakeasies of Chicago and New York during the 1920s. She was so short that she had to sit on top of the piano to be seen in the crowded dives she worked in, but her voice expressed the full range of a woman’s love, devotion, and despair. (The term “torch singing” was invented to describe her art.) She moved to Broadway, where in 1927, she created the role of Julie in Florenz Ziegfeld’s original production of “Show Boat.” With other members of the Broadway cast, she appeared in a sound-film prologue to Universal’s otherwise silent 1929 movie version of the Edna Ferber novel, and in 1936 played Julie again in a lavish version of the musical directed by James Whale. Her footage in the 1929 version has been lost, but she was a memorable presence in Whale’s film, which preserved her definitive rendition of the Jerome Kern-P.G. Wodehouse classic “Bill.” Unfortunately, Morgan shared with the characters she played in Show Boat and Applause a weakness for alcohol, nurtured in the gin-mills where she spent most of her professional life. She was just 40 when she died of cirrhosis of the liver in 1941.

If Morgan’s career was at its peak when she made Applause, Mamoulian was about to begin a decade of creative experimentation during which he helped the talkies develop into a medium as supple and expressive as the silent film had been at its best. Today, most critics and historians consider Applause the first American film to demonstrate that the coming of sound had brought more than noise to the art of the motion picture. –Charles Hopkins

“Screen Song: By the Light of the Silvery Moon”
Directed by Dave Fleischer

Follow the bouncing ball as you join in singing this old favorite wittily interpreted by the artists of Fleischer Studios. 35mm, b/w, 5 min. HEARST METROTONE NEWS, Vol. 1, No. 200 (September 28, 1929)
The first Hearst sound newsreel, with stories ranging from roller-skating chorus girls to the withdrawal of British troops from the Rhineland ten years after the end of World War I. 35mm, b/w, 8 min.

“The Gigolo Racket”
Directed by Roy Mack This Vitaphone short allows us to see the Helen Morgan familiar to New York audiences instead of the aging, pathetic burlesque queen she played in Applause. As Helen Marlowe, a glamorous musical-comedy star who falls in love with a man she believes to be a gigolo, Morgan demonstrates her matchless way with a torch song in “Nobody’s Breaking My Heart” and “(No Matter What They Tell Me) I Know He’s Mine.” 35mm, b/w, 20 min.