An Evening with Don Murray 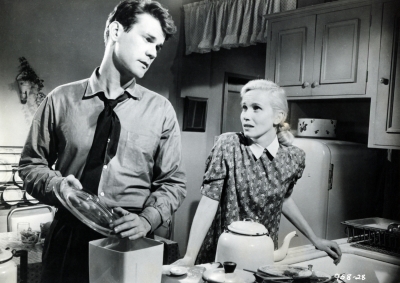 With leading man good looks and screen presence to spare, actor and director Don Murray could have easily pursued a highly successful turn as a matinee idol or teen heartthrob. To the contrary, throughout a distinguished career that includes an auspicious feature film debut opposite Marilyn Monroe in Bus Stop (1956), Murray has consistently selected ambitious dramatic projects reflective of his own socially conscious views and concerns. In a long run of memorable and challenging roles, including co-starring as a tormented closeted senator in Otto Preminger’s Advise & Consent (1962), Murray has specialized in flawed, complex characters that are often unsure, afraid, and profoundly human.

Join cinema scholar Foster Hirsch in conversation with Don Murray, along with a screening of a classic television drama and a feature film from the Archive’s vaults, both starring Mr. Murray.

The Philco Television Playhouse: “A Man is Ten Feet Tall”

In this powerful early television anthology directed by Robert Mulligan (To Kill A Mockingbird, 1962), Don Murray stars alongside future cinema legend Sidney Poitier as an AWOL soldier that forms an unexpected deep friendship with an African American dockworker. As racial tensions on the waterfront escalate to unbridled brutality, the fates of the two men become intractably intertwined.

Use of The Philco Television Playhouse: “A Man is Ten Feet Tall” courtesy of Films Around The World.

Directed by Fred Zinnemann (High Noon, 1952) and featuring a harrowing score by Bernard Herrmann, this pioneering, realistic examination of drug addiction stars Don Murray as a returning Korean War veteran dependent on morphine due to a battle injury. In perhaps the defining role of his career, Murray’s riveting, unsettling performance twitches with the palpable anxiety and desperation of a soul in free fall.