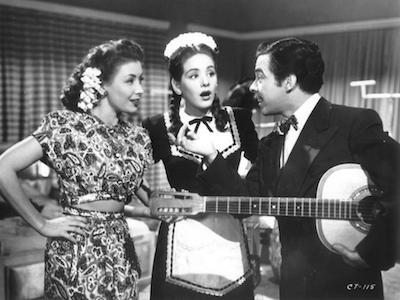 The plot of Ahí está el detalle (You’re Missing the Point) is too convoluted for words, but it starts when Cantinflas tries to score a free meal from his girlfriend, maid to the patrón. This film catapulted Mario Moreno “Cantinflas” to stardom, making him one of the most bankable stars of the Golden Age and beyond, and a national icon. Much of his appeal resided in his embodiment of the pelado: a resilient underdog, whose wisecracking verbal contortions outwitted members of the upper classes. Rooted firmly in a working-class sensibility, the pelado had been a controversial staple of Spanish-language theater in both Los Angeles and in Mexico, condemned by critics for perpetuating stereotypes. The incredible virtuosity of Cantinflas’ wordplay and parodic reversal of class dynamics, however, enthralled audiences around the globe. Even later in his career he continued to side with the underdog, declaring support for his Chicano activist “brothers” in Los Angeles.

Tin-Tan decides to put on an international music show to alleviate his debt problems. The comic persona of Tin-Tan (Germán Valdés) was intimately linked to Los Angeles through his trademark character of the pachuco. With his zoot suit, confident swagger, streetwise sensibility, bilingual wordplay and embrace of swing, Tin-Tan became the cinematic embodiment of a cultural figure forged between two nations. As part of an identifiable Mexican-American youth culture in Los Angeles, pachucos and pachucas were at the center of a city-wide hysteria about a supposed “Mexican crime wave” during World War II that culminated in the Sleepy Lagoon Trial of 1942 and the Zoot Suit Riots of 1943. The actor’s relationship to Los Angeles included his emulation of pachuco style, frequent live appearances on local stages, and an embrace of a cross-border Mexican identity. Brazilian, Cuban and Argentine music also helped the film attract audiences across international borders.