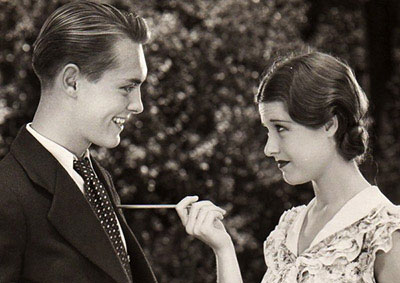 The first 30 minutes of The Age of Consent may be the randiest of the pre-Code era—the entire campus of “State College” seems awash in over-sexed undergrads—a wave of hormones met head-on by the forces of repression in the second half. Brushing off standard issue Hollywood punishment, director Gregory La Cava orchestrates such an unexpected interrogation of the nature of morality itself it’s hard to read the ending as anything but deeply ironic.

Constance Bennett burns up the pre-Code screen as Lorry, a prostitute back on the make after a jail stint with her eyes on a wealthy publisher and a plan to blackmail her way to easy street. Mucking up the works is Joel McCrea’s barge captain who crosses Lorry’s path and who she can’t get off her mind. Packed with snappy lines — some of the best delivered by Pert Kelton as Lorry’s hard-boiled friend–Bed of Roses is director Gregory La Cava’s steamiest work.