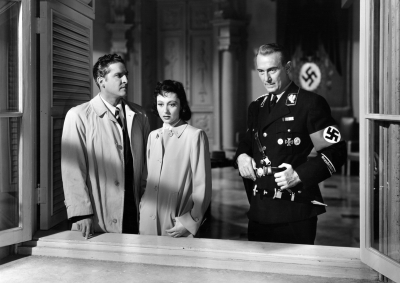 The paisano residents of a small California town recall young rascal Benny with mixed affection and approbation, as he left town under a cloud following a fracas with a policeman. News that Benny has been posthumously named a war hero sets folks reassessing their relationships to him. Actor Arturo de Córdova, cast as a would-be suitor to Benny’s girlfriend (Dorothy Lamour), is a rascal whose get-rich-quick schemes are displaced by a newfound nobility in the wake of Benny’s apotheosis.

Actor Arturo de Córdova portrays Paul Breda, Czech resistance leader in the struggle against the Nazi occupation of his country. In this suspenseful anecdote, Breda and a group of Czechoslovakian hostages are held under suspicion of killing a Nazi officer, a sham procedure that could end in execution for all. De Córdova is an effective ensemble player, winning over to the opposition the apolitical Milada (Luise Rainer), daughter of a Czech collaborator.