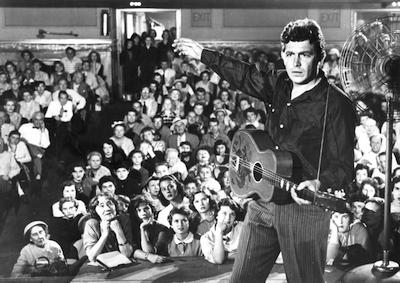 Director Elia Kazan’s second collaboration with screenwriter Budd Schulberg after On the Waterfront (1954) is a corrosive attack on the ascendant medium of television. Andy Griffith, in his screen debut, plays Lonesome Rhodes, a charismatic, guitar-picking hillbilly-turned-TV star, eventually becoming a power-mad demagogue. Hyperbolic, energetic and in many ways prophetic, the film indicts both television and the cult of personality in postwar America.

Followed by:
The Naked Kiss
Directed by Samuel Fuller

Shot on a shoestring and conceived as an indictment of American bourgeois hypocrisy, The Naked Kiss is a bombastic, idiosyncratic but wholly original hybrid—the B-movie as social critique. A reformed hooker finds renewed purpose as a small-town orthopedic nurse. Although courting the dashing local philanthropist promises to cement her integration into mainstream society, but her romantic fantasy is dashed in a shocking plot twist.