9 to 5 and She Married Her Boss 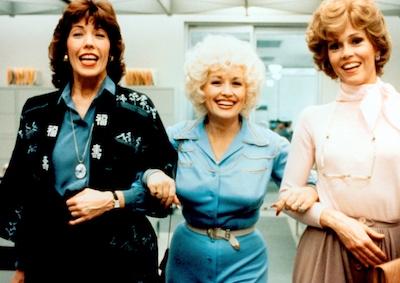 Who hasn’t wanted to exact revenge on their sexist, megalomaniacal boss? Consolidated Companies coworkers Jane Fonda, Lily Tomlin and Dolly Parton (in her big-screen debut!) band together after believing they’ve poisoned their backstabbing, handsy head honcho (Dabney Coleman). Ms. Fonda’s new production company, IPC, was at the helm for this timely, candy-colored, yet darkly hilarious satire that envisions a dream workplace free from tyrannical leadership. The heightened reality of this wildly successful and popular farce finds perfection in a femme-led office utopia, and a cathartic world where bigots are punished for their transgressions. With interludes into dream-like fantasyscapes, multiple kidnappings, and an incredible scene of weed-enhanced female bonding, 9 to 5 proves that “you can run an office without a boss, but you can’t run an office without the secretaries.”

She Married Her Boss (1935)
Directed by Gregory La Cava

Highly competent executive secretary Julia Scott (Claudette Colbert) willingly plays “office wife” for department store owner Richard Barclay (Melvyn Douglas). But when she marries her boss for what she hopes is love, Julia quickly learns that Richard can only think of a “partnership” in terms of how it might help his business. This cheery romp from the comedic mind of the sorely underrated Gregory La Cava (My Man Godfrey) features Ms. Colbert at peak charm, flirt and wit, with a bouncy script that keeps pace with her comedic wiles. Featuring a bold-faced assessment of gender politics that advances well beyond the overriding sentiment of its Depression-era backdrop, She Married Her Boss maintains that sometimes, work can mix with play.