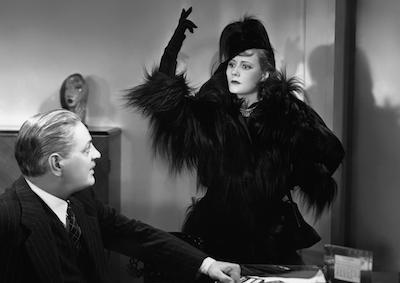 Theodora Goes Wild marked a turning point in Irene Dunne’s career as her first foray into screwball comedy, in which the actress played a clandestine author of risqué novels unbeknownst to her puritanical aunts and conservative community. Complications abound when the suave and handsome New York artist (Melvyn Douglas) who designs her book covers seeks her out in her small town. Although Dunne received rave reviews and her second Best Actress Academy Award nomination for her endearing and whimsical performance, the actress resisted making the film, unconvinced that comedy would suit her talents. Dunne credited her agent, Charles Feldman, for persuading her otherwise, as well as for encouraging her to expand her acting range beyond melodrama and musicals.

This supernatural screwball comedy was also Constance Bennett’s initiation into the genre, and likewise, her turn as a comedienne demonstrated the actress’ overall strategy as a freelancer to develop her acting range in an array of films. Costarring with Cary Grant, Bennett plays a recently deceased, fun-loving co-bank owner and wife who "haunts" a good friend Topper (played by Roland Young, in an Oscar-nominated role) to loosen up his uptight lifestyle and spice up his marriage. Critics at the time welcomed this new comedy persona for Bennett, noting that her earlier pre-Code era dramatic roles required little more of her than to appear glamorous and stylish, whereas Topper delivered what The New York Times described as an "animated, whimsy" performance.