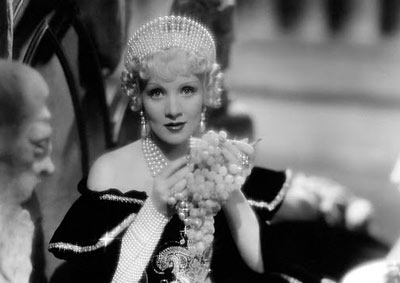 This beautiful, delirious film traces the rise of Catherine the Great of Russia from her arranged marriage to the hapless future Czar Peter III in 1744 to her accession as empress following Peter’s murder in 1762. Released in September, 1934, it followed by six months the U.S. release of Catherine the Great, a British film directed by Paul Czinner that covered much the same ground. Produced by Alexander Korda in typically lavish style and starring Czinner’s wife, Elisabeth Bergner, as Catherine and Douglas Fairbanks, Jr., as Peter, the British film used spectacle as background for what he called “a relentless exercise in decor,” with Catherine and Peter’s story as pretext for a stunning series of visual effects. “Comparisons are not even called for,” noted Variety. “Korda played ‘Catherine’ for drama; Von Sternberg plays her for pageantry.”

In contrast to the carefully researched 18th century background in Czinner’s film, Sternberg created a Russia that was as fanciful and stylized as Eisenstein’s in Ivan the Terrible. Grotesque carvings festoon the walls and furniture of Catherine’s palace, dwarfing the actors and competing all too successfully, in some scenes, for the audience’s attention. The intent may have been to emphasize the primitive, semi-medieval nature of the world into which Catherine was thrust after her sunny childhood in a provincial German court, but the background are so outlandish that they amuse rather than frighten: in truth, the Russian court as imagined by Sternberg and his designers would not look out of place in a Disney cartoon. For all its “pageantry,” the film looks more expensive than it was. Most of the action takes place on one ingeniously constructed set; and when Ernst Lubitsch, who was serving a brief, unhappy tenure as head of Paramount, complained of Sternberg’s extravagance in hiring crowds of extras for a short montage sequence, Sternberg pointed out that he had used stock footage from Lubitsch’s 1928 production The Patriot instead. (That sequence is all that survives of The Patriot today, incidentally.) Most audiences today find The Scarlet Empress hugely entertaining, but the film was so poorly received in 1934 that it became the first Sternberg-Marlene Dietrich film to lose money. Their next film, The Devil is a Woman (1935), failed even more disastrously, and Sternberg’s partnership with Paramount and Dietrich was at an end. The careers of both director and star went into eclipse, until Dietrich’s triumphant comeback in the role of Frenchy, the raucous saloon singer of George Marshall’s Destry Rides Again (1939). Sternberg continued directing films until the 1950s, but he never regained the autonomy he enjoyed when he created the gorgeous monstrosity that is The Scarlet Empress.–Charles Hopkins

“The Hollywood You Never See”
Behind the scenes with Cecil B. DeMille and his team of special effects experts during production of Cleopatra (1934). 35mm, b/w, 10 min.

“Hearst Metrotone”
First photos of the assassination of King Alexander of Yugoslavia and continuing coverage of the Hauptmann kidnap trial highlight this newsreel issued one month after The Scarlett Empress opened in New York. 35mm, b/w, 10 min.