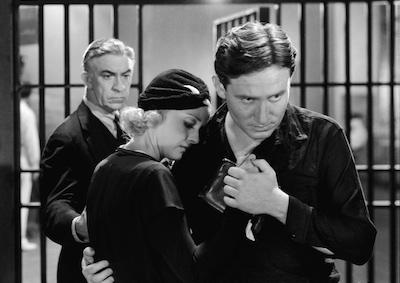 The sole screen pairing of Spencer Tracy and Bette Davis is an unsparingly grim film based on Warden Lewis E. Lawes’ book. Arrogant gangster Tommy Connors (Tracy) leaves his girlfriend (Davis) behind after he is sent up the river to do hard time. Connors believes his slick mouthpiece (Louis Calhern) will be able to undermine the integrity of the upright warden (Arthur Byron) with whom he engages in a contest of wills. Curtiz’s exceptional compositions enhance a distinctive social commentary that is folded into a classic Warner gangster melodrama. With Lyle Talbot, Grant Mitchell and Warren Hymer, the picture also features second unit footage shot at Sing Sing prison.

The illustrious John Barrymore delivers a tour de force performance as Tsarakov, a club-footed puppeteer who rescues a young boy (Frankie Darro) from an abusive father (a pre-Frankenstein Boris Karloff) and turns him into a famous ballet dancer (Donald Cook), through whom he lives vicariously. Curtiz artfully directed the Great Profile’s follow-up to Svengali by working the cast and crew so hard during a short schedule that Barrymore compared the experience to being a finalist in a marathon dance contest. Co-starring Marian Marsh and Charles Butterworth as Tsarakov’s insipid assistant.