DSW is the premier entertainment design showcase on the West Coast for professionals in costume, scenic, sound, lighting and production design 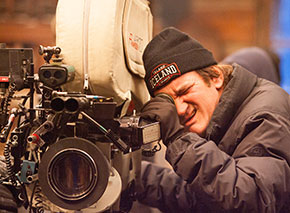 Named one of the 100 Most Influential People in the World by Time, Tarantino has received multiple Academy, Golden Globe and BAFTA Awards and was nominated for an Emmy and a Grammy Award. He is one of the most celebrated filmmakers of his generation with cult hits such as Jackie Brown, Kill Bill, Pulp Fiction and Reservoir Dogs. In 2012, Django Unchained released to critical acclaim and became the highest-grossing film of his career exceeding $425 million at the worldwide box office. Django earned Tarantino his second Oscar for Best Screenplay, and the film received numerous Golden Globes, BAFTA and Academy Awards, including Best Picture. His latest film, The Hateful Eight, starring Samuel L. Jackson, Kurt Russell and Jennifer Jason Leigh, received three Academy Awards nominations. Tarantino's diverse work as a producer exemplifies both his commitment to first-time filmmakers and his support for his experienced peers and colleagues.

"We are extremely pleased to welcome Quentin Tarantino to be our keynote speaker at Design Showcase West this year," states Brian Kite, Department of Theater Chair. "Mr. Tarantino is a passionate filmmaker, who uses lighting, set and costume design to give his films their distinct visual style. This same passion can be seen in the student work showcased at DSW each year where the future leaders in design meet with film, television and theater industry professionals to advance their careers."

As part of DSW, the UCLA TFT David C. Copley Center for Costume Design has established a unique partnership with Swarovski, the world's leading producer of precision-cut crystal, to confer its Swarovski Shooting Star Award upon a UCLA TFT M.F.A. costume design student who has shown exemplary strides in his/her work.

Second-year UCLA TFT costume design graduate student Kumie Asai will be receiving the 2016 Swarovski Shooting Star Award. In 2013, Asai graduated with an A.A.S. degree in Fashion Design from Parsons School of Design in New York and then moved to Los Angeles to pursue her graduate studies at the UCLA School of Theater, Film and Television.

DSW is made possible through the support of our corporate partner Spylight and benefactor M·A·C Cosmetics. It is hosted by the UCLA School of Theater, Film and Television's Department of Theater and distinguished members of the Art Directors Guild, Local 800; United Scenic Artists, Local 829; Costume Designers Guild, Local 892; Set Decorators Society of America; Motion Picture Costumers, IATSE Local 705; and International Silks and Woolens.